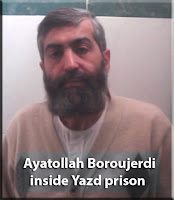 Ayatollah Boroujerdi's peaceful view about different religions including Judaism religion has caused he call Jewish people in all over the world religious brothers of Moslems. Noting that Jewish people are the offspring of prophet Isaac and Moslems are the children of prophet Ishmael and both of those two holy men are Abraham sons so, he believes that every kind of conflict and fight between these two divine religions causes to damage to their origin and separation from their root. He said during an interview in Evin prison: " I confirm each religion that reforms human, takes him away from animal instincts and intensifies his pure feelings. Each religion gets human nature to freedom and justice and takes him away from harshness and wildness is an honorable and good opinion and belief." His intellectual view about other religions is so, that at the present, in military prison in Yazd, he accepts and welcomes those prisoners who believes in Bahai religion and are rejected by other prisoners, warmly. It must be said that as the result of this peaceful view, there is a firm friendship between him and a Bahai countryman called Mehran Bandi in Yazd prison. The only crime of this countryman is propagating Bahai religion and he has been sentenced to 3 years imprisonment.
Ayatollah Boroujerdi in reply to the censure of prison authorities that why he as a Shiite clergy defends a bahai, has said:" the only crime of him is his undertaking to his religion and on this matter he has not trampled other one's freedom and security. He is only a religious propagandist as I am the propagandist of my religion too and I have not violated one's opinion and I have forced no body to accept my religious beliefs. How we can exit and expel an innocent human like him from humanity circle?! In spite of all hardships and disagreeable acts have been done on me, I have friendship whit him eagerly."
Ayatollah Boroujerdi believes that friendship, understanding and unity must be established among all human on the earth as each nation can develop and progress by its way and method .

We are watching this... those of us in the rest of the world who call ourselves Liberals. Please don't doubt that.