The intensity of Iran regime machination against Ayatollah Kazemeini Boroujerdi 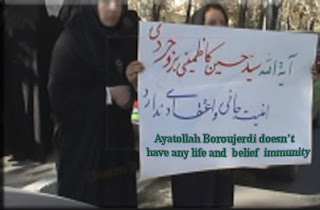 Following the protesting gathering of the family and relatives of Ayatollah Boroujerdi in front of the United Nations Office in Tehran which was formed because of inattention of government and special court of clergy authorities to physical state of this liberal clergyman, a new threat and harshness wave has been intensified against his family.
According to received reports; his family who was going to Yazd to visit him, was attacked along the road by a forged clash as some of them became injured. This machination has been formed subsequent to threaten his family during some last days.
The persons who are informed on the reasons of these actions which are followed coincident with using massive limitation inside of military prison in Yazd against Ayatollah Kazemaini Boroujerdi, believe that since all plots of the regime against this clergy who are follower of the separation of religion from state, containing: forcing him to accept on of these three cases" silent , agreement and or capitation" , have been ineffective as yet , the regime tries to break off his communication with foreign world completely and annihilate and clear his name and memory in world news media .