Dr.Hesam Firouzi, the physician of opinion and political prisoner was taken to prison 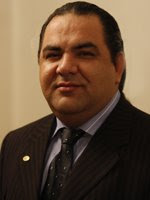 Dr.Hesam Firouzi had earlier been detained several times, that after making file, he was sentenced to 15 months imprisonment and the sentence was approved in the court after revision and today he was taken to prison.

He has been sentenced on the charge of acting against national security, blowing rumors, protecting and treating political prisoners and disturbing public opinion.