The statement of the followers of the pacific clergy Ayatollah Boroujerdi, to protest against the detention of Dr.Hesam Firouzi coincident in the same 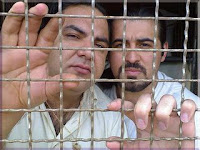 The unforgivable guilt of Dr.Firouzi in the view of oppressive government of Iran is revealing the entity of religious exploitation, also announcing the grave state of well-known opinion and political prisoners like: Mr.Ahmad Batebi, Mohammadi and Mr.Broujerdi too. In spite of this, governmental authorities has charged him with unreal and ridiculous charges such as "acting against national security" to show their illegal acts legal.
Many opinion and political prisoners have suspiciously been killed during the three decades of Mullahs' government, as its last example is the suspicious death of Amir Heshmat-Saran who passed away in hospital while his hands and feet were in chain!
The aim of the government from increasing pressures on this conscientious physician and transferring him to Evin prison on the one hand is intensifying the fear and horror of the atmosphere and on other hand preventing from treating prisoners, as we can find the effects of such these harsh acts, in keeping the number of diseases and defectiveness' of prisoners secret and also increasing in the number of the suspicious murders in prisons.
Ayatollah Boroujerdi's followers in addiction to express their heartfelt sympathy with the respectful family of Dr.Firouzi, announce their firm protest against these inhuman behaviors.
Occurrence of such these unjust acts in the same time of Norouz and the beginning of spring is an obvious evidence on the enmity of the religious government of Iran with all goodness and elegance of the nature.
We hereby ask all Human Rights activists to bring up the matter of Dr. Firouzi's situation in Human Rights Organizations and to follow up his state to achieve required results.
Ayatollah Boroujerdi's followers in Iran and Europe
Wednesday, March 18, 2009