Ayatollah Boroujerdi’s letter to the chief of judicial power 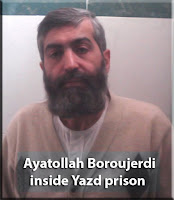 God says in holy book: “every one who be unjustly killed, we will help some one to take his revenge”
Dear chief of Yazd central prison, Mr. Alizade:

Please forward this letter to the chief of judicial power, Seyed Mahmud Hashemi-Shahroudi as soon as possible, according to your moral, legal, human and Islamic duty.

Although you told me a few years ago that” don’t interfere in the affairs of the Ministry of Information “and you refused to help one of the descendants of holy Mohammad who has sacrificed his life in servicing Islam and the religion of his grandfathers around 50 years, but since prisons are under your control, I’m forced to send my letter to you in order to you don’t have any excuses and pretexts in the time of ” the day that neither possession nor children have gain for man “ and “ the regretting day “ and “ the day of loss and gain” and “ the day that man will run away from his family and relatives” ( these are all the names of the resurrection day in Islamic view). There is no doubt that you believe that Iran regime is a democratic one and you don’t deny this reality that all those countries are the parts of the United Nations have completely accepted its charter. I’m a conscience and political prisoner and believe this regime is null and void and can’t be continued in this way. Can you avoid your legal and international duties just by announcing that there is no political prisoner in Iran, while I have some evidences and documents which have been presented to the United Nations High Court for Human Rights and recorded by my attorneys and are ready for the time of court session? Surly these matters will be considered and solved in those universal sessions by the prominent experts and jurists. Now I account the open and public violations of Human Rights taken on myself:

I have transferred from a prison to another prison and from a section to another one in Tehran and Yazd for 30 months and now I have completely lost my health. I have been in section 209 under extreme physical and psychological tortures. They (government) have always ignored my appeal to hold an open trial in the present of without border reporters and humanist and independence lawyers and also they have silenced and have no reaction regarding my appeal to bring non governmental physicians. They have confiscated my exiguous possession and led to destroy my family.
I’ve heard that they send every one who they want to kill gradually, to Yazd prison that called Secandar prison. They have made solitary confinement for me and have denied telephone to me. How can you speak about Ali’s justice (Imam Ali) in the presence of these so many oppressions and despotisms? According to the United Nations charter that your government is one of its undersigned, the place of a political and opinion prisoner is separated from other prisoners. He has some special privileges such as: keeping in the special place for politicians and daily and continuance communications with his family and lawyers and also the right to visit his lawyers and the representatives of legal and civil institutes of the United Nations. Now I who have become old, sickly and disable during these three years I were taken hostage by the religious and republic regime and I feel death every day, hereby issue an ultimatum to you.
With the hope of the establishment of freedom, Independence and democracy
Seyed Hosein Kazemeini Boroujerdi