Ayatollah Boroujerdi : I have always recommended that religion must be separated from government 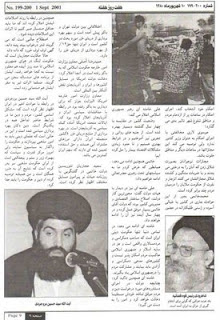 According to a released document in newspapers of September 1, 2001, coincide with increasing pressure, suffocation and execution of rough juristic judgments on people , Ayatollah Boroujerdi announced his public protest ,as follows :
The main problem of our country, people and religion in current situation is interference of all affairs together .Religion has been used as a means for political intentions, whereas religious scholars' duty is engaging in and performing religious affairs and must leave government to politicians, but today the center of power and politics that is with oppression , violence and injustice has formed religious government which its effects and results are harmful for every body and I have always recommended that religion must be separated from government.
Some peo

ple believe that Ayatollah Boroujerdi didn't have any opinions and beliefs in separation of religion from state before his detention and he has expressed such these subjects after his arrest to attract the attention of the world!
The publication of the above document is a firm reason that rejects such these rumors and shows and reveals the severe opinion conflicts between him and the government during past years.
This religious leader has always been faced various restrictions and threats, for example: on September 30, 2002 he had been warned with a letter by the government that he and his brother who is a clergy too, don't have permission to continue the Imamate (leadership) of Masjed-e Noor mosque anymore.