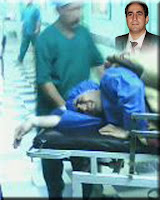 On Monday morning, January 26, 2008 Mr. Mehrdad Souri 37-year-old and married after tolerating severe pains in his bowel was transferred to Buali hospital in Tehran and was immediately operated on.

He had been detained in general section of Evin prison for 5 months from Mordad 13, 1387 .he suffered from digestive diseases and had been confided to bed in the hospital in the prison for several times during his detention. Gas poisoning in the first detention ( in Oct 2006) , unsuitable hygiene and malnutrition and nervous pressures in prison have intensified his diseases, moreover he had been beaten during the first months of detention in 209 and 240 sections of Evin in 2006.

It is necessary to say that was an electrician that was eliminated from his official job in 2006; this matter has caused severe economical pressures on him and his family too.