A letter to Ayatollah Boroujerdi's wife 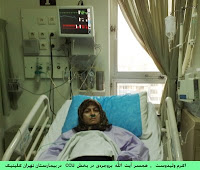 This is one of the letters to Ayatollah Boroujerdi that has been received by Human Rights Activists in Iran and since publishing this letter by this organization is contrary to its constitution so it has sent this letter to Ayatollah's family according to trust and now the letter is published on this site. It's necessary to say that Ayatollah Boroujerdi has always hade a friendly relationship with religious minorities especially with Baha'is people who are under more pressure in .

The text of the letter

Don’t be disappointment about divine tests in this temporal world

Be preacher of justice and right to become holy and heavenly. Be like a bird that has a good voice to delight hearts.

That was the only thing that I have in this temporal world and I offer it to you…..

I ask our great and kind God to give you, dear compatriot health, to give your children security, your husband resistance and firmness, Iranian nation freedom and world's people general peace.