Mr. Kazemeini Boroujerdi’s complaint to the conference of the Prosecutors of the Islamic countries in Tehran 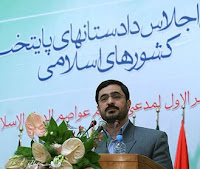 Please accept the greetings of an exiled prisoner from unjust and appalling prisons of Islamic Republic of Iran.
I am a liberal and anti-despotism leader. My sin as a clergy, who is opposed to mixing religion with politics, is so capital and unforgivable! Because I have warned and announced that my compatriots are continuously abandoning of the traditional religion of this sacred and oppressed country and I have expressed and reflected the voice of my countrymen about opposition to religious dictatorship.
Although I have had public and practical movements and activities in Islamic thought and culture area for more than 30 years and I am from well-known family of Al-e-Aaraj and I descend from the excellent and unique family of the Prophet Mohammed and holy lady Fatima, but I have been attacked and violated credit, finance, physically and mentally by prosecution of Islamic Republic of Iran for a few years, my mother was murdered in this way and my family was violated too and while I’m only 51 years old I have become old and decrepit due to different tortures and the international physicians are not allowed to examine and treat me as a hostage of injustice and harshness ,by judicial authorities of the government.
Moreover my trials were held in darkness conditions of despotism of unjust and imposed judges and they recorded and offered a forced trial with censorship to the current history of Iran! Although I am a political and opinion accused, but my trials was fabricated and held behind the closed doors as I didn’t have right to choose an independent and non governmental lawyer and reporters without borders weren’t allowed to attend and be present in it.
Now that the religious imperialism founders of Iran are your host, I ask conscientious people to send a representative to visit me to become informed about my real demands and stances as a religious prisoner and about the cruelty and crimes of those who claim to religion, justice and republicanism.
I make complaint against all criminals in current history of the world to just and competent prosecutors and I refuge to your creator from your ignorance and inattention to my complaint.
Thank you very much
Seyed Hosein Kazemeini Boroujerdi