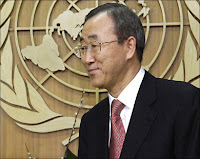 Honourable Secretary General of the United Nations, Ban Ki-Moon:
As an apolitical religious leader who has been imprisoned in hidden and appalling prisons of the Islamic Republic of Iran under the severest and inhuman tortures for three years because of propagandizing free and nongovernmental religion, and now is in a grave physical and psychological situation that there is no hope to continue his life, I ask you as an international position to consider my condition urgently please.
The oppressive governor of this despotic regime has deprived me of visiting my lawyers and accessing to medical treatment by conscious and independent physicians during my detention, and in cases World's legal, civil and human organizations and institutions asked for sending Human Rights representatives andsupervisors, they continuously obstructed it under the pretext ofinterfering in the internal affairs of country. Aren’t the interfering actions of this regime in the affaires of other countries interference in peaceand stability of the world? Aren’t it counted as a threat against peace and compromise amongst nations? But unity and cooperation of news agencies and Human Rights defenders is interpreted as interference in internal affairs of this oppressive regime that ignores and doesn’t observe the United Nations charter?!
Respectfully yours,
Seyed Hosein Kazemeini Boroujerdi in Yazd prison