Mr. Boroujerdi’s plea to the United Nations Secretary-General to hold an open referendum in Iran 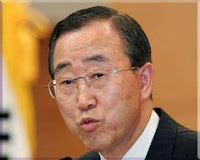 The secretary-General of the United Nations, Dr.Ban Ki-Moon

Thirty years ago Ayatollah Khomeini as the head of Islamic promised the people to enhance economic situation, spiritual and social betterment and with these false promises rose to power and has been ruling the people unjustly. Since this tyrannical regime has not complied with its promises and has caused much economic and social damage it is the right of Iranian people to overthrow this government and to choose a democratic government.

All these false promises given by the leader of Islamic Republic has been recorded in international press and news agencies around the world and also in .  The most important of these promises are shown in these slogans: “”.

on behalf of all Iranian people and as a religious leader who according to the photos and videos of his meetings tens of thousands of people of this country attended in his meeting in the biggest sport stadium and paid attention to his words when gathering of people was forbidden even in a few numbers, I kindly ask Your Excellency to request qualified experts in Islam and international law to gather, and hold a meeting in order to consider the subject of unfulfilling the first commitments of this regime founder, in an multilateral legal, civil, human and religious view and pave the way and assist Iranian people in  an open referendum.

So, I ask you to take the divine, conscientious and world responsibility of holding this great referendum and I demand the United Nations organization to save the noble and honorable nation of in all over the world.