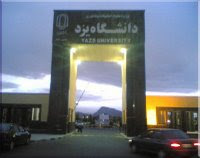 Some groups of the students of the college of law in Yazd survey general sections of Yazd central prison several times in every month for research and training. They insistently succeeded to enter the special section for clergy on March 23, 2009 for first time.
Some discussions on law field, its importance and relevant jobs were brought up during that survey as were faced the keen interest and favor of the students, but this matter made governmental agents worried, so they prevented from continuing it by use of force.

Thus, the students became acquainted with a small part of the violent acts bout political prisoners like Ayatollah Boroujerdi.

Mr.Boroujerdi addressed the students and said:
Indeed; observing condition of prisoners and listening to and acquainting with their problems is the best experience for the students of college of law throughout country.
If an interrogator is informed on elegant and tender God-given feeling, he’ll never use torturing means for interrogation. How can an inspector who knows the consequences of imprisoning a poor man, stands up against the tears of a bleak and defenseless human? If a judge who is proud of his knowledge and relies on and pronounces judgment according to it, were informed on the negative and destroying results of breaking families’ nuclear on the soul and spirituality of society in short and long time, he would never pronounce a judgment based on prejudice, political matters and his opinions.
He asked one of the students:
What do you know about prison? You see the high walls that are decorated with barbed wires and the watch-towers which are built every where and an armed person is put on every one in order to aim a man or even every beings and kill him in the case of disturbance, but are you acquainted with that persons who are tormented among the iron fences like the beings in the cage? Can the right to freedom be violated by the laws and frameworks of universities and theological schools? Isn’t depriving humans of freedom one of the mortal sins that makes God anger? Can freedom be wrested from the best creation of God only by creating judicial cases and files? Are all the interrogations obtained by Intelligence department, Ministry of Information and Information of armed forces that are the basis of the judicial power’s procedure and act toward its accused , fair and equitable? Are they based on mere truth? Do the judiciary officials think that they act according to these words of God “ be just because justice is near to piety” and “ people should act justly” by relying on that interrogations only? Are all the present documents of judicial power based on God’s words and don’t need any explanation and consideration and are parallel and according to the present matters of society? Is increase in and multiplicity of judicial cases during these 30 years, the indicator of reform and improvement of society? And does it confirm the first slogan of the architect of the Revolution who called prisons as university?
Moreover he stated in the presence of the student:
Whatever I saw during my detention in the various sections of the prisons of the Islamic government, was only crime, cruelty, hatred, vengeance, transformation of human identity, mass annihilation of credit, belief, morals and spirituality, farewell to religion and conscience forever, hatred toward religion and avoiding sacred beings and traditional learnings.
The system of expanding prisons will have no result but increasing cemeteries and mental hospitals, raising the numbers of divorces and enhancing prostitution and disasters and the prosecutors who are wallowed in darkness and concupiscence can’t deny these matters and they can’t cover them up by holding conference of prosecutors of Islamic countries.