Declaration of Mr. Boroujerdi prior to election of presidency 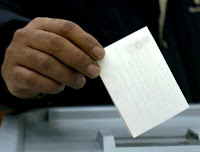 Now that we are at the time of tenth election of presidency in Iran, the plea of people of Iran is at its height. The reason being in last thirty years we have had such election but those conceited who have supported Supreme Leader (Velayat-e-Faqih) was confirmed by The Guardian Council of the Constitution and came to power. Hence, the people of Iran have been suffering from the lack of a president who is conscientious and sympathetic who works for well of society.
The question is can people have an open referendum in a country where the owners of the land have to follow the leader that they do not trust.
To the contrary of scissor of censorship and oppression is there a liberal freedom fighter that will rise from the ashes of tyranny and to put an end to the cries of the innocent people of Iran.
I ask is there any importance given to the opinion of the humble and courageous people in this election. This dictatorial regime does not have any mercy even for its close devotees. For instance, in the last election one of the candidates of the presidency who had been a confidant to the leader of the revolution of 1357 (1979) had reported: “while I was sleep for an hour they have replaced my votes to another candidate.”
How can we count on and trust a president who is a puppet of the Velayat-e-Faqih and a group of people whose actions are hidden from society is at the head of governing the country.
Anyone who is the candidate of the presidency should know that any inattention to the rightful needs of oppressed people will result in divine rage.
I pray to the almighty God to have mercy on our land and to free us from the bondage of the enemy of humanity.
Seyed Hossein Kazemeini Boroujerdi