Mr. Boroujerdi’s message to the next conference on the relations between Iran and arab world 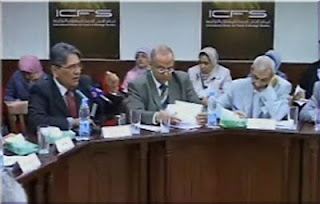 As a religious prisoner leader who is spending regrettable and disastrous condition in captivity of those who claim to be religious and republican, I send a historical and fundamental message to all world’s liberal and reformists through your conference:

Countries in the Middle East don’t know that what the facts are behind the deceitful and delusive propagations of the oppressive governors of our country. They have deceived our poor and oppressed people under the name of elevating monotheism and Islam for 30 years .they abused the highest popularity of clergy and the most beautiful divine slogans to overthrow Shah’s regime.
Three decades of the revolution have been passed and not only there is no result of that Utopia promised by its founder, but in comparison with last Imperial Government our flourishing, liberal and unique country has been ruined and now there is no vestige of sound economy and traditional beliefs of people. Thirty years ago Iran was one of the Islamic centers of the world, but today if the pressures and oppressions of these dictators on society are removed , you will unfortunately observed that no interest, no obligation and no propensity for religion has remained and public distaste for spiritual and holly beings has been expanded.
O’kind and philanthropist neighbors;
If you want to know what this regime has done about its poor and miserable nation, it suffice to pay attention to the real poverty and injustice statistics ,moreover imprisoning me as a clergy who advocate separating the religion from politics, is the indicative of baseless and futile claims of religious regime of Iran.
How can it be possible that the solid majority of people of a country that is the owner of the biggest natural and subterranean resources of the world are in the grip of poverty? Isn’t there any just and fair trial to save and plea for the rights of this poor nation?
O’ dear Arab brothers;
Do you still withhold from supporting the opponents of the authorities of Islamic Republic of Iran who call themselves Guardian of Muslims under the name of Velayat-e-Faqih and want to master and assume ownership all Islamic countries? They give themselves right to interfere in the affairs of other countries and to give the possessions and wealth of these poor people to their protégés because of such these imperialistic purposes.
Are you satisfied that people in this country abandon God and His religion and you as the real owners of that (Islam) be stand by and watch thought, cultural and practical transformation of this territory of original Islam?
Islam was risen from your region Jazira-Al-Arab at first, then why don’t you help your religion that is being annihilated?
I wish that this distaste for Islam, the memorial of Holly Mohammad would be found only in Iran, but they are the cause of distrust of other nations toward Islam too by abuse of Islam.
Do you encounter with Salman Roshdi or a Danish caricaturist for the reason of insulting Islam, but you have a friendly relationship with a government that spread terrorism, harshness and crime under the name of Islam?
Don’t they increase the interior conflict among oppressed Palestinians by supporting Hamas?
Don’t they devastate the unity of Lebanon nation by providing multilateral and ceaseless supports for Seyed Hassan Nasrollah?
Don’t you pay attention to the hidden and furtive role of Iran authorities in Iraq as they want to grasp Iraq government and it information and security forces by military and security actions and aimed and specified helps to some of the authorities of that?
Respectfully yours,
Seyed Hosein Kazemeini Boroujerdi