The explanation of torture in Ayatollah Boroujerdi’s view 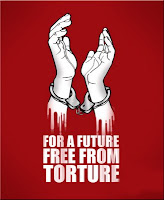 I remind my lawyers inside and outside of Iran of the explanation of torture, means forced detention in prison and physical, psychological, familial and credit pressures due to it.

In past there were some definitions of torture on a prisoner and there was a definite limit for physical and psychological torments on him, but now some invisible tools are used for tormenting and annihilating opinion and political prisoners because of the advancement of the knowledge of torturing and of assassinating the character of opponents and the improvement of the technique of breaking challengers’ resistance as its result on one hand is increase of our hatred toward the governor and oppressive persons and consolidation of our resistance and on other hand , hurt and destruction of nerves and feeling of the captive in dictator chains .the way , quality and quantity of eating and food in prison is in such a level that gradually brings various diseases and pains in stomach , bowel and digestive system of the prisoner. The residence in prison has been formed as makes respiratory problems. The treatment method and behavior of the physicians of relevant clinic with patients leads them to psychological complications. Internal rules of prison annihilate human identity and bring animal behaviors for the captive in along time.

Prisoner’s deprival of communication with his family or the pressures due to it changes his warm relationship with his family to chilly and destroys the nuclear of family. Extreme poverty and financial requirements of the prisoner and his family damages the bases of morals and faith and prepares society for entering into quagmire of corruption and prostitution.

A prisoner with moral decline and heart dependence on his last behaviors, impresses other persons in the section and destroys and changes their character and prepares them for accepting another one. The rough behaviors of guards in prison, lead to disappointment, aimless and discouragement and bring death for prisoner moment by moment. Deprival of access to independent lawyers and conscientious physicians intensifies strokes and heart attacks and puts life in the danger of destruction and annihilates irretrievable life.