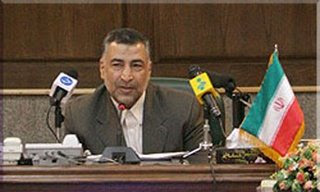 With the hope of serving God and poor and oppressed nation of Iran
First I want to ask you who are citizen? Assuredly, whosoever was born in this dear country and has Iranian Identity card. Then I want to state that this citizen has some rights which must be observed. And now another question is“ who is responsible for providing these rights?” certainly, that governor who governs the society is responsible for observation of these rights legally, lawfully and nationally. Considering to these matters, I want to address you for a few minutes.
Conscientious brother!
Those rights that the founder of this Islamic regime had promised 30 years ago and caused that he become indebted to the history of future generations of this sacred country and he must to express and explain them (that rights) to his successor to recorded a good name for himself in this way, were that same slogans that he himself expressed and confirmed the public rituals in political demonstrations of that time which the basis of all of them was Independence, Freedom and Islamic Republic and moreover, complete cooperation with shah’s opponents after victory, confirmation and acceptance of their identity and entity, reverence for their long year credit, human and civil expenses and also drawing the Utopia for the real owners of the country which created a heaven in this world as there is no trace of finance, credit and mental poverty and people have a much better civilization and living condition in it than in the Imperial Government! Now what’s your judgment when you observe the 30-year-old results of this regime?
Can you deny the multitude of hidden and open prisons built during Islamic Revolution?
Is abundance of censorship in the books published by the permission of Ministry of Guidance and the heavy suffocation in press of country, the same freedom was in the mind of the founder of the religious government?
Is belief inquiring and depriving people of right to religious, national and trade thoughts and opinions, the guarantee of Iranian nation Independence?
Is the continued and expanded presence of Ministry of Information agents among people and in society and crowded places, stabilization of republicanism?
How can it be possible that nobody has courage to protest, shout and criticize in this poor and miserable country, while daily protest and demonstration of people against the procedures of their government is free and open in all countries in all over the world and is continuously broadcasted on Iran national TV? May be it is one of the new manifestations of nation ruling on their fate too!
Is the Islam brought by this regime founder, the same original Islam existed 1400 years ago that according to it, absolute Vilayat was only for God, his messenger and the Imams were chosen by God?
Is its Imam the same Ali-ebne-Abitaleb who resigned to the decision of his nation in Seffain war and put down his sword and abandoned annihilating the command of his enemy and revered the referendum of his opponents and resigned to the imposed and unjust arbitration which led to his removal from caliphate?
Isn’t one of elements and conditions of the Shiite legislative Vilayat, unanimity?
Did last Shiite authorities, famous religious jurists and well-known experts in Islamic laws interest or ready to establish government of clergies, during the long absence of Imam Mahdi and forming of Shiite authority?
Has religious indulgence and negligence principles given present governors permission for harshness, suffocation and despotism?
Who is responsible for the massive and continued apostasy of people from their traditional religion?
As a religious leader who according to the pictures and videos of his meetings has a high and expressive position in credit and social area, I have been imprisoned in various prisons of the dictators who claim to religion and republicanism, under different kind of physical, mental, familial and financial tortures on charge of expressing such these matters for many years. Can they prevent from repetition of history by these exiles and imprisonments?
Do they want to change people fate and condition by such ugly and oppressive actions?
Never, not at all;
Our prophet said:” an atheist government may be remain and continued, but an oppressive one never”
If this government is fundamental and republic, why does it prevent from gathering of people even in a few numbers?
Is the mass employment in Ministry of Information and sending secret agents into cities, the sign of power and authority?
Every body knows that all these commotions on missiles productions and strategic weapons are because of fear of downfall of the despotism government!
And now this is you and our violated rights!