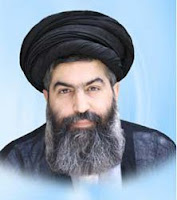 1- Introduce yourself please?
I’m Ali Paydar; 45 and was born in Shahrood. I have B.A in politics. I’m a graduate of one of the West Universities and director of the weblog on Ayatollah Boroujerdi.because of the continuance of pursuance and arrest of Ayatollah Boroujerdi’s followers and also increasing the security restrictions on them, I don’t continue introducing myself.
I learned freedom, equality, respecting people, seeking God without power or rejecting governmental religion, continued combating against despotism and religious dictatorship as the roughest form of despotism and at the end love for homeland and also respect and reverence for ancient Iranian identity and mores from Ayatollah Boroujerdi when Iran was burnt and destroyed by religious dictatorship. I found the difference between Ayatollah Boroujerdi and other clergies that although he was Muslim, but he could gather believers in other religions around himself in peace by adopting a method for propagandizing and spreading his thoughts, as I found making friendly relationship between different religions as one of his abilities.
So according to the Iranian propensity for and interesting in acceptation of religion and his religious morale too, spreading his progressive religious thoughts can play an important role in establishment of peace in Iran and even in the Middle East.
Generally important factor of acceptation of Ayatollah Boroujerdi’s thoughts by his followers and me was this belief that we can have a pacific life with our own kind without caring for religion, race, nationality, color and generic state...
File Download